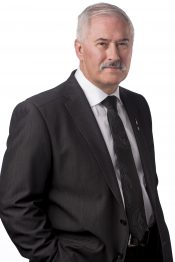 Bob is a graduate of the University of Saskatchewan with two undergraduate degrees.  While at the University of Saskatchewan Bob had the honour of both playing for the U of S Huskies volleyball team and later coaching them.  Upon moving to Winnipeg Bob coached a local Winnipeg men’s team to two consecutive senior men’s open national championships.

Bob is a dedicated Rotarian, having been president at two Winnipeg Rotary Club – St. James and Charleswood, and achieving international success with World Community Service Projects. He is also a Past Board chair for Stevenson Britannia Adult Learning Centre.

Some notable projects completed by Bob include